The Robert and Sara Rothschild Family Foundation is a private nonprofit Foundation, established in 2005 for the purpose of supporting worthy philanthropic projects. A major focus is community development and individual empowerment among underserved populations in Botswana.

It is our belief that the technology exists for individuals to achieve personal aspirations and educational goals, even in remote areas, if they are provided with the resources of a simple library. It is also our expectation that libraries can provide a place where all age groups of the community can participate in lifeling learning;  social services and health programs can be promoted, cultural traditions of the people can be taught, valued and preserved, and a culture of reading can be supported. The library can also serve as an information center where educational and employment opportunities can be accessed. Therefore, we believe that the construction of a simple library, with community members involved in each step of the process, will help to bring about the reality of Botswana’s vision of  “an educated, informed and self-reliant nation.”

In 2004, Bob and Sara traveled to the Cape Town area of South Africa where they were given a tour of Masiphumelele, an informal settlement near Simon’s Town by friends, Carol and John Thompson, who had been working to help establish resources in this community of 30,000 people. One project was a small, one-room library. It was so filled with children and adults, that it was immediately obvious that an addition was needed to accommodate the needs of the people. Bob and Sara agreed to help fund an addition, and to return in 2005 so that Bob could be involved in the planning and construction of the project. Meanwhile, Sara made plans to travel to Botswana in 2005 with Habitat for Humanity, to help construct houses there. The village where her group spent 2 weeks was Matlhako, a rural settlement of 2,000 people. Her group camped in tents under the beautiful Marula trees, and women from the village cooked traditional food for them in large pots over open fires. While sitting around the fire in this peaceful place, a group member suggested that they could use a library, and this is where the idea for facilitating the building of libraries in Botswana began. That same year, the Robert and Sara Rothschild Family Foundation was established for the purpose of providing funds for worthy philanthropic projects.

In 2006, a Memorandum of Understanding was established with the Botswana Government, and in 2007, the project began. Since that time, 15 libraries have been built, bringing the total to 16, and are now operating as part of the Botswana National Library Service. The villages where they are located are: Mmankgodi, Kopong, Ramokgonami, Matlhako, Molalatau, Pitsane-Molopo, Moremaoto, Shakawe, Gweta, Sebina, Nata, and Maunatlala. The Botswana Defense Force Library was also opened in 2009.

The process of selecting sites and constructing libraries is a collaborative one between three partners:

The criteria for selection of the village where the library will be built involves geographic location (distance from other libraries), size of the village, usually between 2,000 and 5,000 people, and the availability of a centrally located plot of land. Another important factor is high level of interest of the community in having a library. Once a village is identified, a Library Committee is organized. These members will take on the responsibility of helping with programs, volunteers, and supporting the work of the librarian. They will also serve as a communication link between the Village, the Foundation, and the BNLS.

Local workers are hired to complete the construction of the building, under the supervision of a contractor from Botswana and the Foundation. Each library has a playground and an outdoor stage for performances. The Library Committee will organize fund-raising to build a kgotla (thatched shelter) where cultural and historical artifacts can be shown and crafts can be demonstrated. After the library is completed, a celebration is held and the library is turned over to the BNLS who will provide the books, computers, furniture, a librarian and staff, and ongoing maintenance.

The Robert and Sara Rothschild Family Foundation continues to stay involved after the libraries are open, visiting, providing support and guidance, and maintaining close ties with each village. 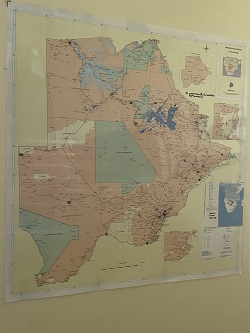